World view change is a huge part of ministry I believe God has led me to, and it’s part of this series on You Tube, this one featuring Melinda Gates. 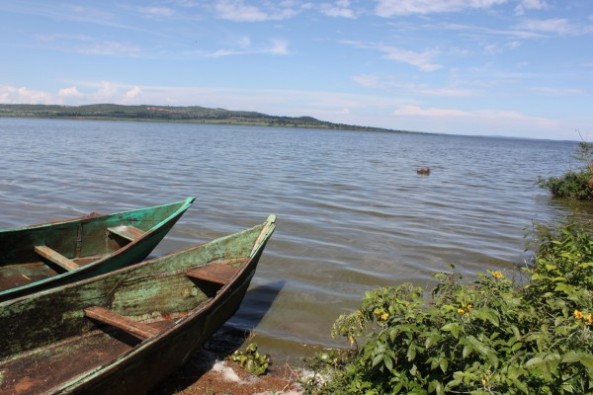 Ashley Taylor took this photo near Bugembe, Uganda on the shores of Lake Victoria. We had gathered with a church for baptisms of six people, and Ashley took this beautiful photo of fishing boats on the edge of the lake.

Busia, Uganda Swamp
James Okumu walks across a swamp near Busia, Uganda that separates his family from trading centers and neighbors. He’s been waiting for two decades for government to fulfill a promise to build a useful road across the swamp.

James Okumu near his home in Eastern Uganda

We walked across this swamp at night, passing over slime-covered logs over and over until we reached the home of James Okumu where we would sleep the night. We were a water well drilling team made up of Ugandans and me who had been working five days on a water well for a village called Buwembe. We were demonstrating a new hand-drilling method that allows a 6-inch bore hole to be drilled entirely without power tools. In addition to water, people like James Okumu also need roads through places like this swamp. People with road and bridge-building skills could coach this community through less-expensive ways to build bridges using mesh-rock methods and other levee methods employed here in the United States.

I’m really proud to announce that the African Children’s Choir is making a World Tour stop at Garnett Church of Christ. I’m excited about hosting these children from Uganda and Kenya in our homes and church for two nights. They will perform Saturday, January 22 at 6 pm and again Sunday, 10 am in our worship January 23. Below is more and a video.

In 1984, when human rights activist Ray Barnett was summoned to help the thousands of orphaned, abandoned and starving children in war-torn Uganda, he and his team were inspired one day by the singing of one small boy, and decided to form the first African Children’s Choir to show the world that Africa’s most vulnerable children have beauty, dignity and unlimited ability, and could serve as a mouthpiece for change, one child at a time.

The African Children’s Choir has performed to packed audiences around the globe, from major churches to every major TV network–including American Idol–to guest appearances with Christian music superstars Michael W. Smith, Josh Groban, and many others. Over its twenty-six years, The African Children’s Choir has helped hundreds of ACC choir tour members realize not only their own personal dreams of a better life, but to duplicate those dreams for many thousands of other African needy children through tour proceeds and sponsorships that provide quality education, food, shelter and medical assistance. Don’t miss this unique opportunity; make your plans now to see The African Children’s Choir in concert on January 22nd, 2010, presented by Garnett Church of Christ and Green Country Event Center. Admission is free. For more information, call 663-3000.

Telling King David’s story this Sunday. If you are in Tulsa, would you come to Garnett Church of Christ and hear this important message Sunday from 2 Samuel? I believe the story will change your life as it has mine.

Cover of After God's Own Heart

I plan to show a video of Gary Chapman’s song that has for many years resonated in my soul and reflects the heart of King David, “a man after God’s own heart” (1 Samuel 13:14).